You all know I love the EUE, the "End User Event", right?

It's Siggraph, shrunken to 250 of your best mates, and held in a pub.

Here's the lineup for the 2014 edition. Register at www.EndUserEvent.com 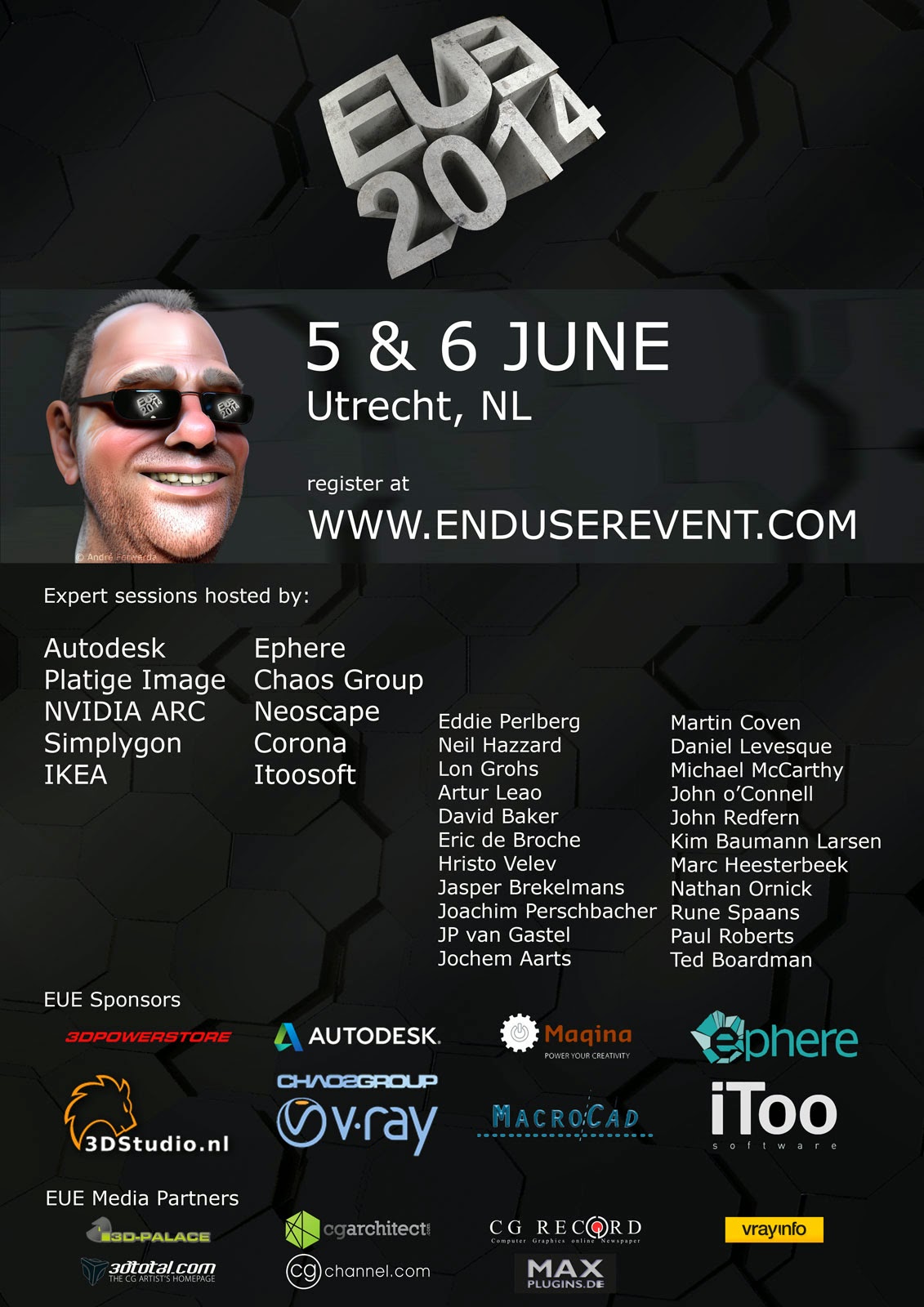 To show off the renewed push for 3ds Max development, product manager Eddie Perlberg will be there along with Martin Coven, plus my very esteemed collegues Daniel Levesque and Neil Hazzard.

Now the sad part: EUE this year is scheduled exactly on the same time that my son graduates from highschool, which, honestly, I had to prioritize. So I won't be there....

...in person. I for sure will be there in spirit!

But I'm shipping quite capable substitutes in the aformentioned people!

They will see you there!

So people have been wondering WHAT THE HECK I've been up to the last year, since I've been qute... silent....

The short story is... this:


The main work that was done was to turn mental ray into an ActiveShade renderer, i.e. that you can work with interactively. Also, for the already ActiveShade-capable renderer iRay, we improved the responsivness of a lot of the updates (no longer waits for mouse-up to apply changes).

Be aware that not every scene edit is supported in ActiveShade, but a lot more than what was supported before now works much more streamlined. In 2014, running iRay ActiveShade was a bit of a pain. Now, in 2015, running both mr and iRay ActiveShade should be a much more pleasant experience where you can actually get real lighting- and shading work done.

About the other features mentioned in the video - I will post more about those as time permits, but the short story is that we enabled iRay string options, and made iRay LPE's (Light Path Expressions) into render elements, which can be quite powerful!

UPDATE: There is one minor ERROR in the above video, though. As a matter of fact iRay does not have a "Shadow" pass. iRay LPE's are about light, and shadows are the absence of light. Only oldschool "non-physical" renderers saw shadows as a "thing" that you can output separately. What you do in iRay is instead to separate different types of lights. You can get a similar amount of control (in a more physically correct way) by balancing lights. But there is no "shadow" element. As a matter of fact, anyone who took my mry201 mental ray FXPhd course know, that "Shadow" passes are evil, bad, and never actually work anyway (with the exception of shadow passes for the background for compositing, of course)

Hello Everybody and a Happy New 2014!

Special new years greetings with this little film my son made.  Only thing I did was some "voice acting".

I pre-warn and pre-apologize to anyone who ACTUALLY knows Japanese. It's part of the joke...


So I know this blog is a bit dormant, but I promise that Hard Work is being done behind the scenes at my new job at Autodesk.