White Out - those nice "product renders"

Here's a short tip: Did you ever want to be just like Apple? And render your products in a shiny magically white room, which still projects those nice magically faded reflections on the white surface?

To do this "physically real" is suprisingly tricky; you'll have all sorts of issues with the "white" actually either blowing out to superwhites, or the "white" in your reflections on the floor plane not looking "white enough" and if it does look "white enough" you can't just get that nice "faded reflection" look?

But nobody said the background plate has to be a shot of your backyard. It can just be... well... plain old "white". 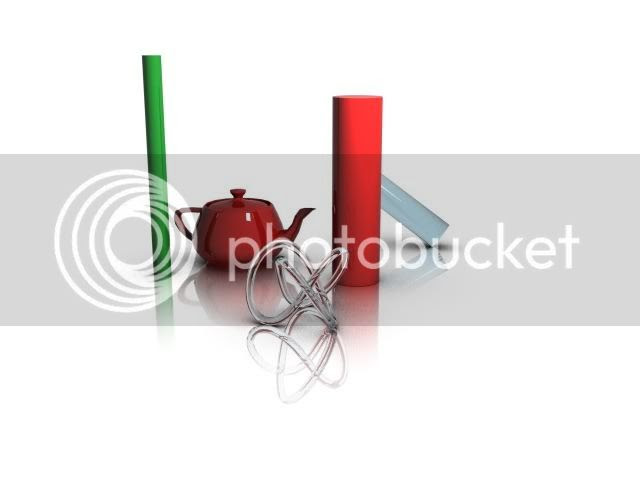 In this scene, the "floor plane" is using mip_matteshadow with a plain white color. The scene background is set to white. Traditional lights are used to light up the "CG objects" with traditional non-physical 0-1 intensity ranges. The reflections in the mip_matteshadow material is set to be subtractive, and to fade out over a given distance.

Et voila - you get this nice kind of render that you are used to finding on something like Apple store. Naturally, you can utilize the various Ray Switchers in the production library to allow the reflections in the objects to appear differently (i.e. a HDRI environment or somesuch) while the background still is just "white".

Sir that's a Very Good topic to utilize the production shaders in mentalray....thanks

I'm Wondering does These shaders including mip_matteshadow works with generic maya shaders? and dows they work in standalone with other shaders an lights?

The answers are "Yes" and "Yes" respectively.

Wow, this is just simply great hint.
Thank you..

hi mr Håkan "Zap" Andersson........... first i want to excuse myself if this is not the place to ask for help, but i have been looking for help in a solution to this problem in many places and in many ways whith no luck......

so this is the problem:

i am a maya 2008 ext 2 user and there is a big problem whith the new ccmesh system and the mental ray approximation editor for the subd approximation, and the problem is that i can`t use any texture for the poly models because the texture(which is plug into the color in a standard lambert material) doesn't get rendered correctly and is partially blocked by some extrange bulge and the texture is just broken in some parts. I have found some info at zbrushcentral = http://www.zbrushcentral.com/zbc/showthread.php?t=56061&highlight=approximation+editor , they fix their problems there whith a mel script -- addAttr -ln "miExportCCMesh" -at bool mentalraySubdivApprox1; -- in maya 2008 service pack 1 but in maya 2008 ext 2 this script doesn´t work and maya says -- // Error: (Mayatomr.Geometry) : MeshShape: polygon mesh can't be exported as a subdivision surface // --, but if i turn off the filter type for the texture then the subd approximation works fine whith the texture. I now that is a solution but i need the filter type on for the texture to looks like i need, so if you now some solution whithout turning off the filter type please help me.

hi, great tips... is there an equivalent for 3dsmax (2k9)? I have had a quick look and no obvious alternative to mip_matteshadow seems to exist? thanks. antony

i discovered the mi matte/shadow/reflection (root) material, basically the same deal... you just have to choose a subtractive colour.

I've tested the above example with the new Arch & Design Render Elements in MAX 2009....and Discovered that Mip_matteshadow is not supported by render elements.
any Suggesions?

i have tried to use the mr shader element with a material to shader linked to the mi matte/shadow/reflection (root) material (which logically seems like it should work) but to no avail...

i will let you know if i happen to work it out!

I Hope To Make it work again..but the mip_matteshadow is a production shader...so this should work with the render elements..I Hope this isn't a bug with MR. and should resolved.

I'll try also to find a solution for this as soon as possible.

Hi zap! I`m in progress right now with a scene and this tip is very usefull, but i'm pasinbg through a couple of issues.

the first one is that when i try to change the background color to with, and using the mrphotographic exposure control it shows in black anyway. If I set a mrsky it shows fine, but not a simple withe.

the second issue is that my scene has a refractive glass and I'm using caustics. but caustics doesen't show corect either.

how can I fix this?

Can you show us how did you settup the lights? I am switching from vray to mental ray and i do these kinds of renders every day for a client so i really need to see the light settup. I dont need the reflections on the floor but the lights are the key.

I've tried this effect on my own, and do have a workaround, but I'd like to try it this way, also. I'm using MaxDesign'09. Sorry, I don't understand "mip". What/where? Can't find it in any combination in the MatEd. I have used a matteshadow material in Scanline. Also don't know what "production shaders" are. Some in here are talking about render elements - is that where to find all this?
Thanks.

"The reflections in the mip_matteshadow material is set to be subtractive"

Please Master Zap, how can I do that with XSI's mip_matteshadow?

If this scene is Maya, would you be able to share it as a download? It would be much appreciated.

Hi guys,
Thank you so much for this wonderful article really!
If someone want to buy some glass filter tips I think this is the right place for you!

Hope you can gave us more posts like this and i really appreciate your hardwork.
928bet

Wow! So fun and easy and totally accurate to follow!
ดูบอลสด
ผลบอลเมื่อคืน
ผลบอลสด